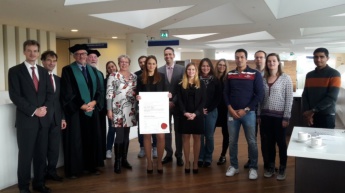 The ROI can add another doctor to its list! Although not in the medical sense of the term, but in academically statistically environment . In 2011, Susan Bryan traveled from South Africa  to Rotterdam to start working as a PhD student at the Rotterdam Ophthalmic Institute.  She investigated data concerning visual fields of glaucoma patients. Assessing longitudinal series of visual fields makes it possible to detect the effects of glaucoma at an early stage and to determine functional changes. This allows the clinician to use adequate treatment, which results in the disease to be delayed. However, the measurement method for capturing the visual field of the patient is plagued by a large measuring variability.

And at that point statistician Susan came in handy. She developed a model for the prediction process of glaucoma and evaluated all kinds of factors that could affect the progression of glaucoma. For those who are interested, the details and extensive evaluation can be found at the Erasmus MC website.

On an early morning in October – more specifically at 9.30 on the 4th of October 2017 - Susan was allowed to defend her findings in front of a multidisciplinary jury. For three quarters, Susan was thoroughly interrogated, but without hesitation Susan answered all of the questions perfectly. After deliberation, the jury decided to award Susan the title Doctor and provided her with the official document. Of course, we celebrated this victory with a few drinks in the evening.